3) Get soaked while still wearing you clothes 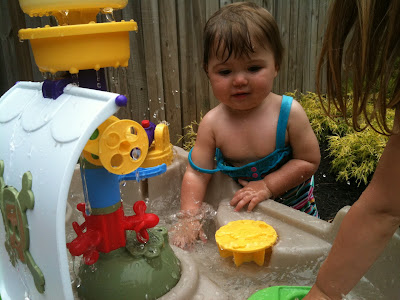 The Bean's first birthday present arrived a few days early but just in time for a really hot Saturday afternoon. After patiently waiting for the new water table to be assembled (a task that involved both mom and dad despite the simple 5 step direction manual) the girls took it for a test run and gave it an immediate two thumbs up. Of course it only took a few moments before they were soaked head to toe and had to strip down before coming back into the house, but I think they would agree that it was worth it.
Posted by Katie at 1:15 PM