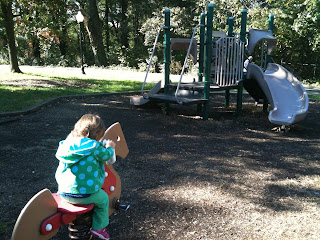 Despite the insane amount of rain we have had this week, we were able to squeeze in one quick playground stop at the Wyman Park playground. Wyman Park located in Charles Village, by John Hopkins University was designed by the Olmstead Brothers and built in the 1920's. The park is pretty large and divided into several areas, the playground is located at the corner of the park near Charles and 29th streets. While it is pretty small, it has the basics, climber a few swings and bouncy horses. I would consider this more of a tot-lot since most of the play equipment is built for smaller kids. The playground is also located just behind the large statue on the corner that the girls wanted to check out too. Overall, not much to this playground, but if you live in the area it is a nice spot for playing with little ones.

For a full list of Baltimore Playgrounds checkout our Playground tour 2011-2012
Posted by Katie at 10:17 PM