Sometimes finding a project that interests both The Bee and The Bean can be a little tricky. It usually happens that it is something the Bee is really interested and I try to figure out a way to include her little sister in the fun. So I was very excited when it seemed to be the Bean who was most excited about this project. Inspired by Tinkerlab's Egg Carton Creative Challenge I put two egg cartons out on the table last week and asked the girls what we should make with them. We got out some paint and the Bean started painting, while the Bee and I begin cutting the little cups out of each carton. We didn't really have anything specific in mind. Once the egg cups were dry the Bean spent a long time stacking the cups and knocking them down, but the Bee had other plans. I helped her to put holes in the top of each egg cup. She then got a long piece of string and begin to string the cups on as if they were beads. Once she had strung a few beads onto the string I tied the string between two chairs. The girls then slid the cups back and forth, like a bead maze. After they were done we took the string back down and the Bee went back to stacking, sorting and organizing the cups. The girls really enjoyed every part of this project and it was a good reminder to me that sometimes the best way to get both kids interested is to let them decide the part they want play. 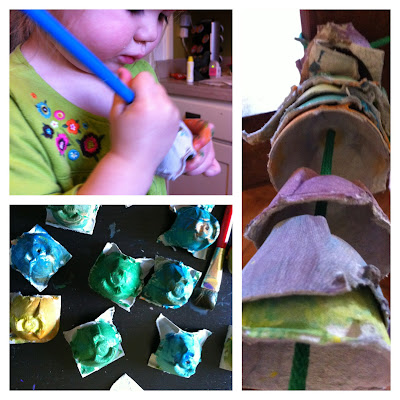