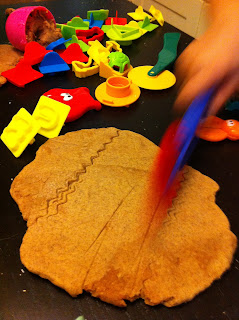 We have been doing a lot of play dough playing around here lately. Partly because the weather has us spending more time inside and partly because it is an activity that both The Bee and The Bean have been interested in. The Bean has finally moved past the phase of putting the play dough in her mouth, which also makes the play more enjoyable for everyone. Since we have been playing with play dough so much lately, I thought we would mix it up a little by making cinnamon play dough. We used a basic play dough recipe we have tried a few times and seems to work well:
2 cups of flour
2 tablespoons oil
1 cup of salt
4 teaspoons of cream of tartar
2 cups of warm water
mix in a pot over med/high heat and keep stirring until the dough forms.

To this recipe we added 2 Tablespoons of cinnamon. Cooking the play dough made the whole house smell good and the cinnamon was the perfect accompaniment to the cold weather and holiday decorations. The girls loved the cinnamon smell. I was a little worried that the cinnamon might tempt The Bean to put the play dough back in her mouth but fortunately it didn't. We have a plastic bin of play dough toys that we have gathered over the last few years. Filled with some stamps, cookie cutters, plastic utensils and a variety of other odds and ends this bin has plenty to keep the play dough interesting.