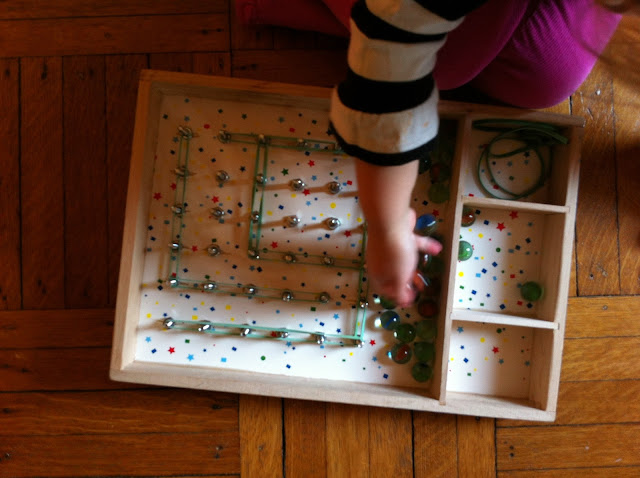 There are certain things, much to my husbands chagrin, that I just can't throw out. I don't have any specific plans for them but they seem to have to much potential to let them go. The number one on this list is probably the wooden crates that Melissa and Doug toys come in. At this point we have acquired a few of these and while I never know exactly what to do with them, they seem too useful to throw away. Then in the Fall I bought this fabulous book called Eco-Friendly Crafting with Kids: 35 step-by-step projects for preschool kids and adults to create together by Kate Lilley of Minieco, this book is filled with tons of awesome projects that I can't wait to try. The first one that caught my eye was a marble maze using a Melissa and Doug wooden box! 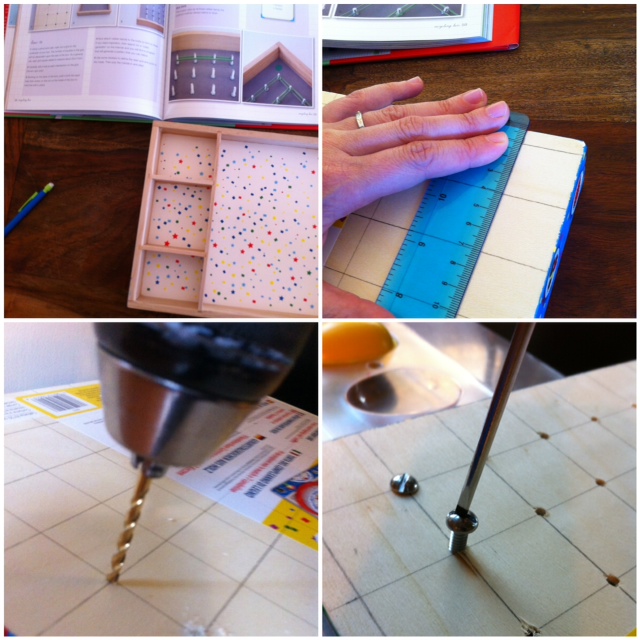 The directions in the books are very clear and easy to follow. In the book she uses a large wooden crate with just one opening, but to make it a little easier to store everything I found a crate we had that had a large open space and then three small square along one side. I started by measuring a grid on the back of the large space, the book recommends measuring 1 1/4 in squares, so that is what I did. Once I had drawn up the grid I drilled holes in the corner of each square, the wood is very soft so the holes were easy to drill. I used a 1/8" drill bit and had a few bolts in that size, then had to run to the store to buy some more. Once I got all the bolts and corresponding nuts for each bolt, I then started screwing them into each hole from the back. Once the bolts were screwed in from the back I twisted the nut on from the front. With all the nuts and bolts in place we were ready to play. I grabbed a bunch of rubber bands we had in a kitchen drawer and some marbles and placed them in the squares along the side of the crate. I then showed the girls how to put the rubber bands on to make a maze for the marbles. I have to admit that the whole time I was making this I sort of imagined that it would be the Bee who would like it most. She loves rubber bands and it seemed a little more complicated, so I thought she being the oldest would enjoy it the most. I was so wrong! In fact she played with it only a little. It was really the Bean who liked it the most. She loved taking the rubber bands on and off. She loved playing with the marbles, although she mostly made little squares with the rubber bands to trap the marbles in. I was so happy to finally having something to do with the wooden crates, I am thinking I might make a few more to give as presents. Does anyone else have any good ideas for what to do with those crates? 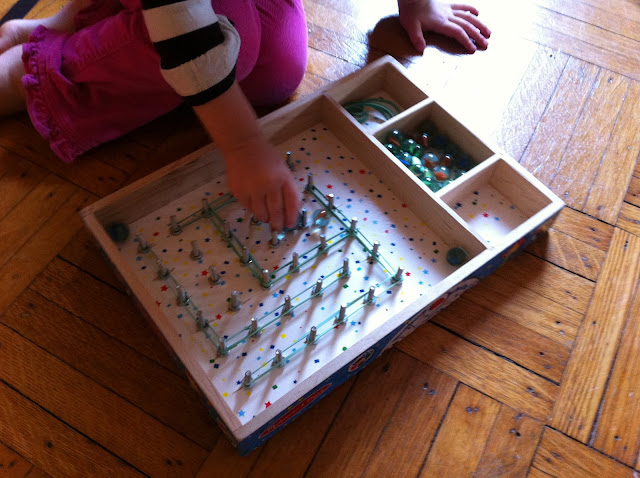