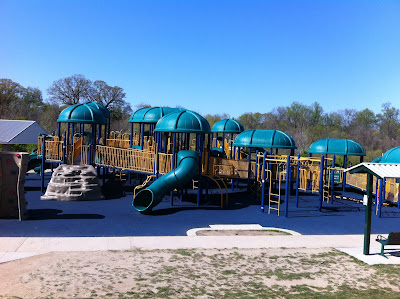 Meadowbrook Park and Playground is located in Ellicott City just off of St.Johns Lane and 29. The large playground has plenty of room for parking, a real bathroom, pavilions with picnic tables as well as covered benches all around the edge of the playground. In short, they were really thinking about families with little kids when they planned this one! The playground itself is huge. There are two parts a large climber for the older ones and a smaller climber for the younger group. Although the Bee and Bean (who would probably fall into the younger group) spent most of their time on the big climber and had no problem navigating. There are rock walls, bridges and slides galore. The playground is part of the larger Meadowbrook park so there are also tennis courts, basketball courts and walking trails. We walked a little ways from the playground and spent some time on a beautiful wooden bridge checking out a small creek. The girls also found some other kids and played with them on the tennis courts, which is fully enclosed. We got there pretty early in the morning (10ish) and the playground was  empty but by the time we left a little before lunch it was starting to get crowded. I Imagine that this playground is hopping on the weekend and I can see why. With so much to do we will definitely be back to visit this one.
For a full list of Baltimore Playgrounds checkout our Playground tour 2011-2012 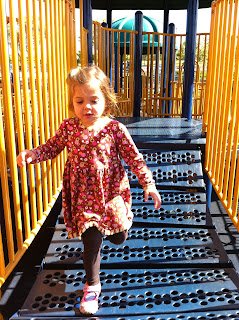