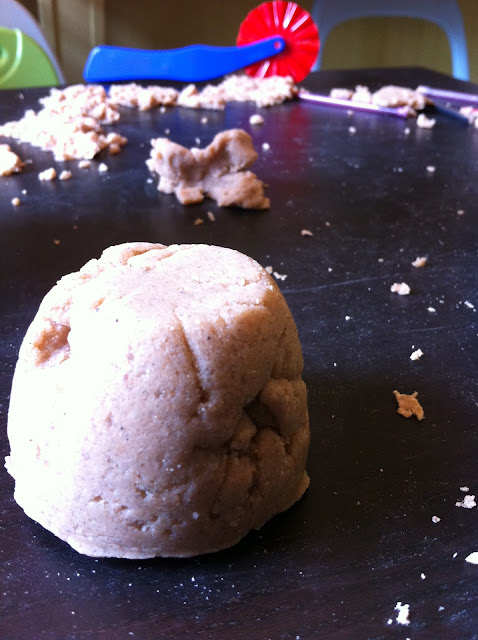 One cold and dreary morning last week, our hopes of playing outside squashed, I was on the hunt for a fun indoor activity. I found this link for How to Create a Sandcastle That Lasts from Family Fun. I was cold, and grumpy about being cold so the thought of sandcastles, the beach and warm summer days made this just the activity I was looking for. Not to mention that the girls love playing with any kind of dough and I already had all the ingredients! So I nabbed a cup of sand from our backyard sand box and mixed it in a small saucepan with 1/2 cup of cornstarch and 1 teaspoon of Alum. Two things I should note here, If you don't have Alum, you can buy it in the spice aisle at most grocery stores. I think it is really used for pickling or something but it is often called for in play dough recipes so I had a jar on hand. The second thing is that since we make a lot of non-edible stuff in the kitchen, I have a cheap saucepan just for mixing play dough and other stuff. While you don't necessarily have to have one for this project, the sand does scrape up the pot a little so you probably don't want to use a good pan. After adding all the ingredients to the pan we mixed in 3/4 cup of water and stirred the mixture over medium-high heat for a few minutes. One thing I have learned about any kind of corn-starch clay is that it goes from not done to done really quickly. So for the first few minutes the mixture was really liquidy, but after a few minutes of stirring it all came together to a dough consistency, at which point you want to take it off the heat. After letting it cool for a few minutes I kneaded it a few times before giving it to the girls. As I was expecting they loved the sand dough. They spent a long time sticking straws in, cutting it up with plastic knives and forks and just squishing it with their fingers. The dough really does look like wet sand and holds a shape well. We enjoyed putting the dough into plastic bowl and then turning it over just like when you make sandcastles at the beach. After  the girls were done playing I put the dough in a Ziploc bag and we played with it again the following day. After a few days in the bag it got very dry and crumbly so I threw it out. Family Fun does however say that you can make something and let it dry a few days to harden. We didn't try it but it might be fun experiment for another day. 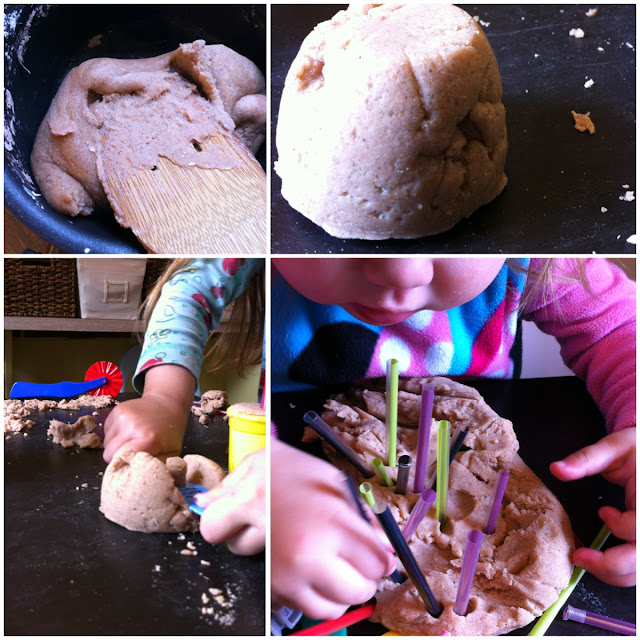