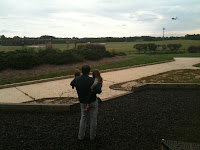 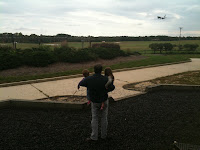 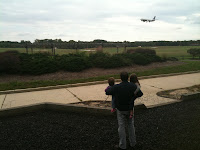 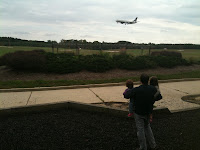 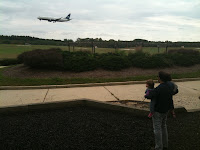 At this point we have visited many playgrounds, many of which elicit cheers of excitement even before we get out of the car. Today's stop on the Playground Tour was not that kind of playground, however it was still well worth the trip. Today we went to the Dorsey Observational Area better known as the BWI playground or the airport playground. Located on Dorsey Road, just off of 97, this playground is actaully very small. One climber with 3 slides and a bridge, however it is at the end of the airport runway where all the incoming planes touchdown. So every few minutes another plane fly's directly in front of this playground, making the lack of climbing equipment sort of irrelevant. The playground is really just to keep kids busy in between planes. The girls loved seeing all the planes, especially the Bean who just kept pointing into the air. I was a little worried about the noise but it really was not nearly as loud as I had expected it to be. The playground is also next to the parking lot for the BWI trail which is a 12.5 mile paved trail that I woud like to go back and check out another day. So the verdict on this playground not the best for climbing but two thumbs up for the view!

For a full list of Baltimore Playgrounds checkout our Playground tour 2011-2012
Posted by Katie at 1:47 PM