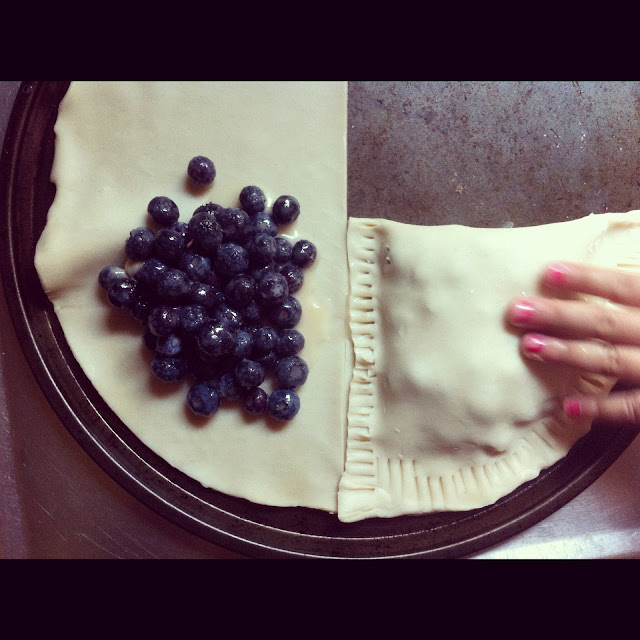 There are two kinds of people, those that like chocolate desserts and those that like fruit desserts. In our house there is a great divide. The Bean and I love anything chocolate: cake, cookies, mousse, etc. The Bee and her dad however, are fruit people. They love pie, cobbler, tarts, danishes or anything with fruit. So the other day, for the sake of peace and goodwill,  I thought we would try something that would make the fruit people in our house happy (and use some of the frozen berries from our various summer pickings.) 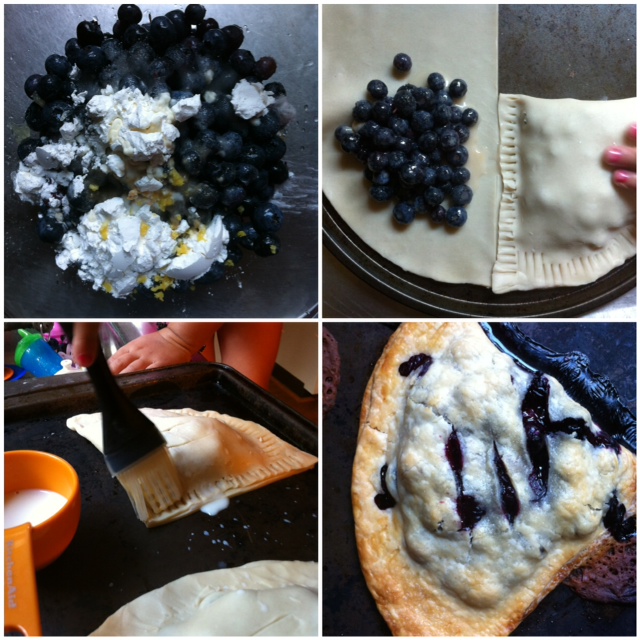 I will start by saying baking is really not my thing. I have actually never made pie before. Partially because its not my favorite but also because I am always nervous about it. Baking requires that you carefully measure, and follow the directions. If you have been reading this blog, you know those are two things I often have trouble with. So the Bee and I eased into this baking thing gradually, by starting with a package of store bought pie dough. We removed the dough from the fridge and let it sit on the counter for about 15 minutes, to allow it to become soft enough to use. Meanwhile we found a great recipe for hand pies from the Artful Parent which called for:
1 1/2 cups of blueberries
1/4 cup of sugar
2 tbsp of cornstarch
1 tsp lemon zest
2 tsp lemon juice
1/2 tsp vanilla
a pinch of nutmeg

We mixed everything but the nutmeg (we were out) together in a bowl. We then unrolled the pie crust and cut it in half with a knife. I spooned the mix into the center of the crust then showed the Bee how to close the edges with the back of a fork. She finished closing up the pies which was a job she took very seriously. After the pies were finished she brushed each pie with milk and we baked them in 375 degree oven for about 20 minutes. The came out so beautifully and the Bee was so excited for her dad to taste them. He of course loved them and not just because we made them for him. Even I had to admit they were pretty good, although they weren't chocolate. The finished pies were such a hit that I am thinking we will have to try them again and this time make the crust from scratch!