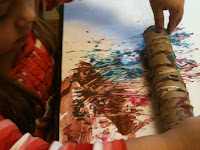 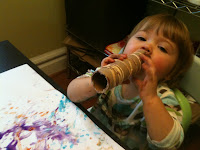 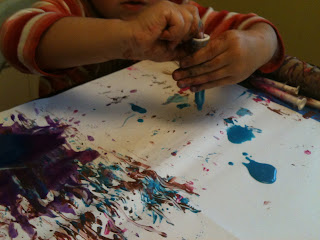 We had a great time today making a huge mess! Another rainy day and two grumpy little girls with runny noses meant that we needed to have some fun and shake it up a little. So we begin by taping some large sheets of paper to the table. I then got out some jars of almost empty tempera paint and added a little water to each jar, just to make the paint a little more runny. Next I pulled out several medicine syringes, the kind that now come with every bottle of children and infants Tylenol, so needless to say we have quite a few. I filled the syringes up with paint and gave them to the girls. The Bee was beyond excited to squirt hers out on the paper. The Bean wasn't able to squirt hers by herself but thought it was hysterical when I squirted it out onto her paper. After they had squirted some paint onto their paper I gave them each a piece of a cardboard tube. I had wrapped a bunch of different sized rubber bands around the tube to create some fun textures. I originally saw a version of this using a rolling pin on Irresistible Ideas for Play Based Learning . The Girls then rolled their tubes all around the paper, mixing colors, splattering paint and making patterns and textures. The Bean also found other uses for her tube stamping the end of it and talking through it like a bull horn, both of which she thought were pretty funny. The finished paintings turned out beautifully but even more importantly we all had a lot of fun and were all a little less grumpy by the end!