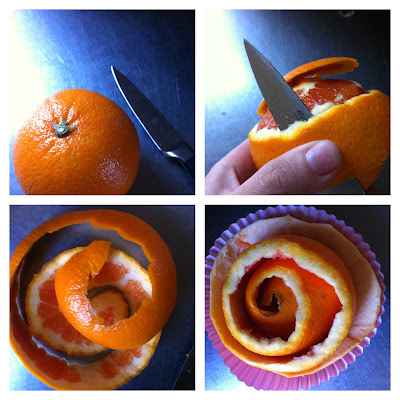 Last weekend while at dinner at my in-laws my Mother-in-law (maker of lots of incredible stuff) showed the girls and I this super cool trick. She took and orange and using a knife (this is the part a grown-up has to do) she cut the peel of the orange in one continuous strip. While I was watching her I wasn't sure I could do that but it was very easy, much easier then peeling an apple in a continuous strip if you have ever tried that. Once she had peeled the whole orange she then took the peel and wrapped it around itself in a spiral. She mentioned that you can use a toothpick to hold it together but she put hers in a cupcake liner which holds it perfectly. You then leave the peel to dry on the counter for a few days, which makes the whole kitchen smell fresh and citrusy. After a few days the peel begins to dry out and really starts to look like a rose. We have kept ours on the kitchen counter right next to the sink and The Bee and Bean have loved checking on it everyday. They particularly like to touch it and see how different it feels as it dries out. 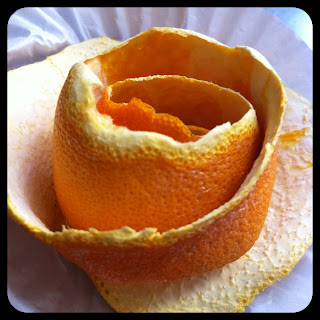