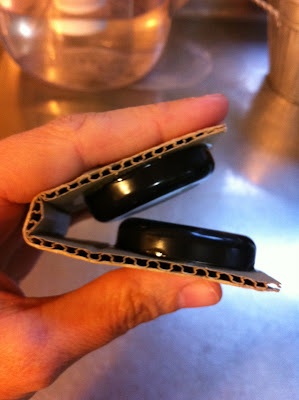 Back in the day, you know before Pinterest, I used to look through books and magazines for ideas and inspirations, and one of my favorite go to's was 365 Days of Creative Play By Sheila Ellison and Judith Anne Gray. I was given this book many years ago, by my friend Debbie, who buys the book everytime at she sees it at a yard sale. While the book was originally published in 1987, it is by no means outdated. Mostly because the creative play ideas are so simple, they are timeless. I pulled the book out the other day and the first page I opened was 357 Bottle Top Castanets. This seemed like the perfect project for us because 1) we love anything that makes noise and 2) We had all the materials right there. To make the castanets I cut a strip of cardboard slightly larger then my bottle caps, hot glued the bottle caps to either end of the cardboard and then folded it in the middle. I made two one for each of the girls and within just a few minutes they were both happily clicking away. I was a little worried that The Bean would have trouble pushing the caps together but she was a pro and happily spent much of the afternoon walking around the house clacking. The Bee liked the clacking but also found other things to do with her castanets, see the picture above. One note of warning, these were not built to last, within a day of play the cardboard was starting to tear and the caps were coming off. However, they were so easy to make and provided so much entertainment I have no problem making them again!