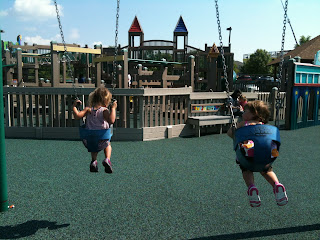 The second stop on our playground tour is the Stadium Place Playground in Waverly. On 33rd Street right behind the YMCA, the playground sits on the space that was once Memorial Stadium. If you grew up in my house this is a very big deal and almost like religious grounds. The playground was originally built in 2005 but had a devastating fire in 2008 that destroyed the playground. There was a large community effort to rebuild the playground and in 2009 the playground was rebuilt entirely by volunteers. This is an awesome playground! It reminds me a lot of Annie's playground in that it is separated into two areas one a designated tot lot for kids 5 and under and the other a larger area for bigger kids. Also like Annie's playground it has a lot to do! All the normal stuff is there swings, monkey bars, climbers, bridges, etc. But it also has lots of unique stuff like a musical chime that you can play by clanking bells, or a little stage area perfect for an impromptu performance. There are a few potential drawbacks to this playground: 1) there isn't much shade, although even with it being a little hotter today it wasn't too bad. 2) The playground is right behind the YMCA which uses the space for the pre-school groups so sometimes it can be a little crowded. Although we were there today with lots of groups out and enjoyed the company. 3) If you have little ones prone to wandering it can be hard to keep up with them. A lot like Annie's playground this one is big and a little like a maze so it can be hard to keep up. Having said that I definitely found this playground easier to navigate with two little ones then I did Annie's Playground. So overall I think this is a great playground and since it is so nice and close to our house I think it will continue to be one of our most visited.

For a full list of Baltimore Playgrounds checkout our Playground tour 2011-2012
Posted by Katie at 1:30 PM