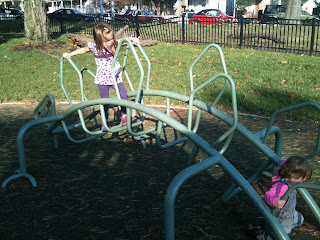 A few years ago I was pleasantly surprised by the Roosevelt Park public pool in Hampden. If you have never been, I highly recommend it, so when a friend mentioned that they had recently updated the playground in Roosevelt Park I thought we would give it a try. The park located on the corner of Falls Road and 36th Streets has had a face lift. New park benches, landscaping and a rubber floor make the playground look a lot nicer. While it is not very big there is a climber, swings and another dinosaur climber similar to the one at the West Towson Playground. The Bee and The Bean love these dinosaur climbers and spent most of their time on it. One downside to this playground, and it may have been the time of day that we went, was that there was a lot of older kids on the playground. We went at 4 on a Friday and the nearby Robert Poole Middle School and Roosevelt Park Recreation Center were both letting out and lots of older kids were hanging out. So if you visit with little ones you might want to try and go earlier in the day.

For a full list of Baltimore Playgrounds checkout our Playground tour 2011-2012
Posted by Katie at 8:32 PM