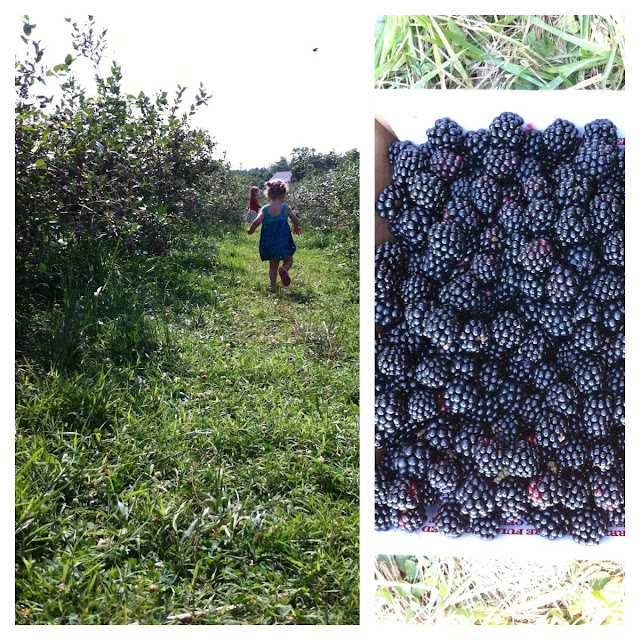 A few weeks ago we took a trip back to Larriland Farms with the Aunts and Cousins, this time for Blackberries. After a fun afternoon of picking we came home with more blackberries then we could eat so I thought we would try a recipe from our current favorite cookbook (At the Farmers Market with Kids) for Freezer Jam. I have never made jam before partially because I was a little intimidated by the process and partly because we are not huge jam fans around here. The Bee and I are both just straight peanut butter kind a gals, so jelly and jams don't always get eaten. However the recipe in the book made it look doable and after tasting how good this jam is we might be converts! 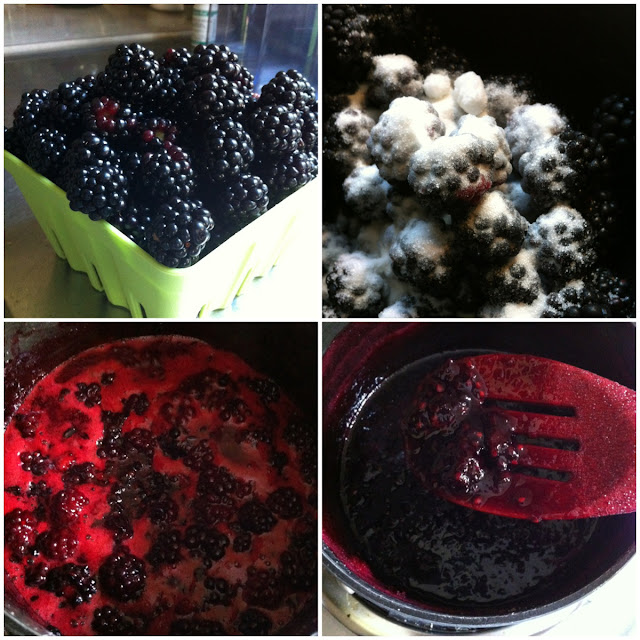 The recipe was surprisingly easy, although it takes a while to cook it only requires occasional stirring which means you can spend a morning playing and making jam at the same time. Here is the recipe:
21/2 pounds of berries (about 7 cups)
21/4 cups of sugar
1 tablespoon of lemon juice

After thoroughly rinsing the berries (the Bee's job) we put them in a large saucepan with the sugar and stirred over medium high heat (my job) until the sugar dissolved. I then added the lemon juice and brought the mixture to a boil. After the mixture was at a good boil I turned the heat down a little and left the whole mixture to simmer and cook down for an hour and a half. I occasionally came in and stirred it and scooped some of the foam off the top but mostly just left it to cook. While the jam was cooking we boiled our class jars, rings and lid in a large pot of boiling water just like we did for our Refrigerator Pickles. After boiling the jars for about 15 minutes I carefully pulled them out and let them dry on a paper towel until the jam was done. After an 1 1/2 hours the Bee and I tested the jam on a plate we had put in the freezer. I'm guessing this is why it is called freezer jam? The  warm jam immediately cooled on the plate and didn't slide off when we tipped the plate sideways so we knew the jam was done (you can also use a thermometer but that's not nearly as fun and exciting.) Once the jam was finished we put it into our jars and let them cool overnight. According to the recipe the jam is good in the fridge for up to 3 months. We tested ours out the next morning on some warm biscuits and our jam got a unanimous thumbs up. Delicious! 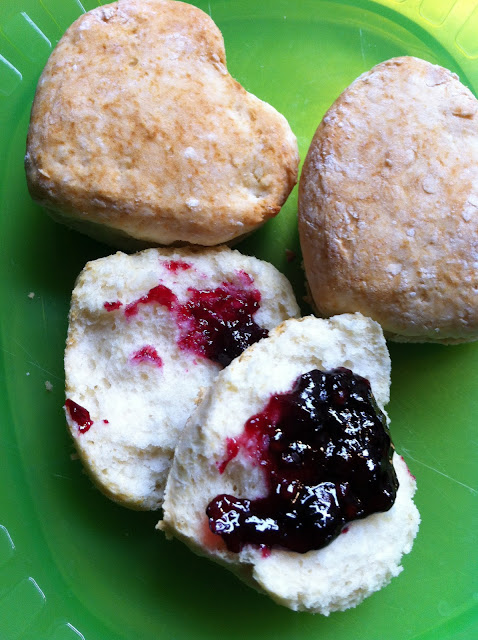