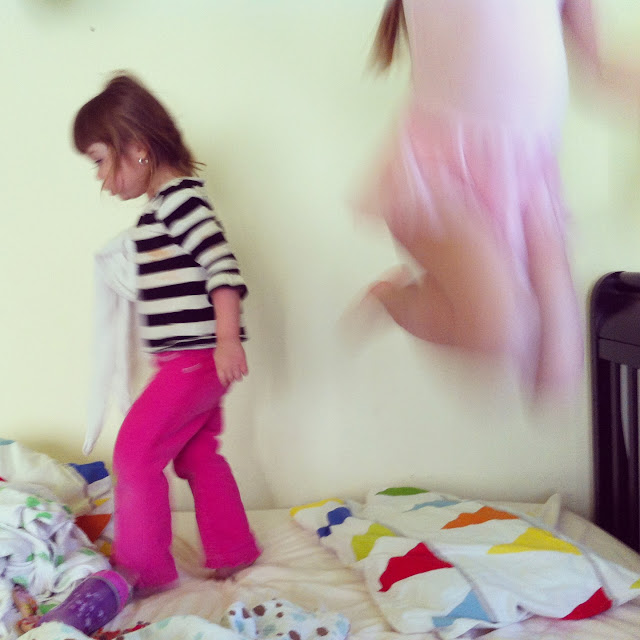 I have a very clear memory, from just a few days after the Bee was born, of trying desperatley to get her to sleep. Finally after what felt like hours of bouncing, shaking and shushing she closed her eyes. Just as I let out the sigh of relief she opened her eye, stuck out her bottom lip, and started to cry. In that moment I really wanted to cry too but instead I busted out laughing. The pouty bottom lip was so cliche, I couldn't believe that this little baby was seriously doing it. Since that first moment I have learned that kids are filled of cliches. From laying on the floor kicking and screaming tantrums all the way to constantly questioning "are we the yet?" in the car. Our most recent cliche is probably my most favorite, maybe because I can so clearly remember doing it as a kid. A few weeks ago I was in one bedroom putting away clothes while the girls where playing in the next bedroom. All of the sudden I realized it was awfully quiet so I yelled " What is going on in there?" With in just a few second both girls in unison yelled back "Nothing." It was so cliche I couldn't help but laugh. I felt like somehow they had gone to some special kid school to learn how to say this stuff. Of course when I went in to see what "nothing" meant, well it wasn't nothing.
Posted by Katie at 3:41 PM