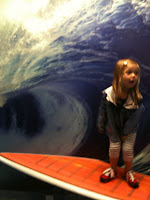 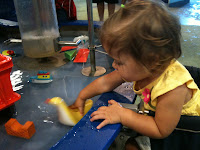 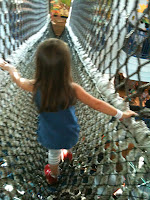 To celebrate the Bee's 3rd birthday we took our first trip to Port Discovery. If you have never been to Port Discovery there is a three story climber that spans the entire center of the museum so as soon as we walked in both girls were impressed. I actually spent a year working at Port Discovery and as a result have held off on taking the girls because when I worked there it didn't have a lot for the toddler/preschool age stuff. However they have added some new exhibits that were perfectly suited for the under 5 crowd and both girls had a really good time. Bean (and Bee) particularly liked their new tot room. I particularly loved the giant light brite board, so cool! Much to my surprise Bee's favorite exhibit was their ancient Egyptian exhibit. At first she didn't want to go in, but Todd joined us after we had been at the museum for a while and she wanted to go back. The exhibit is a little scary, but a cool walk into the tombs of a pharaoh. Bee was both scared and amazed. Since coming home we have looked at several books about ancient Egypt and she has spent a lot of time talking about Anubis, Pharohs and Mummies.