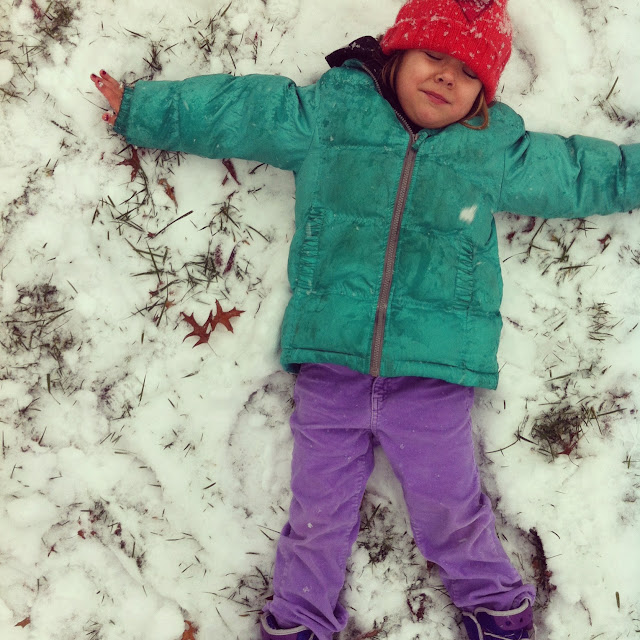 This year for the first time in  long time, we had a white Christmas, well at least a white Christmas eve followed by an inch or two the day after. Either way it was enough to make the Bee crazy. She has been dying for snow since last winter, when we had none. She doesn't just want snow, she wants enough snow to go sledding, she is very specific about this. While I personally am much happier with a light dusting, I know how badly she wants it so I am hoping this winter brings us at least a few days of sledding worthy snow. While we are waiting for snow we  have been reading lots of snow books, so I thought I would share some of our favorites just in case someone at your house is waiting for snow too.

The Snow Day by Komako Sakai
The illustrations in this book make it one of my favorites. The story of a little bunny waiting for the snow to stop so he can go out and play.
The Snowy Day by Ezra Jack Keats
Another one with illustrations I love, a classic story of a little boys snow day adventures.
Snip...Snip Snow by Nancy Poydar
A perfect tale of the timeless battle between kids who are dying for snowballs, snow angels and sledding and the parents who are dreading shoveling, scraping and salting.
It's Snowing by Olivia Dunrea
A sweet story of a babies first snow.
In the Snow by Sharon Philip Denslow
A look at what happens to all the animals in the snow.
Snowballs by Lois Ehlert
Because I seem to be incapable of making a book list without a Lois Ehlert book on it.
The Mitten by Jan Brett
This story somehow always makes me feel better about all the hats, mittens and scarves we loose every winter. Not to mention the way the Bean giggles when the bear sneezes no matter how many times we read it.
No Two Alike by Keith Baker
A nice reminder to celebrate the differences, not just of snowflakes.
The Snowman by Raymond Briggs
A story told all through pictures of a little boy and his adventures with his newest friend a snowman.