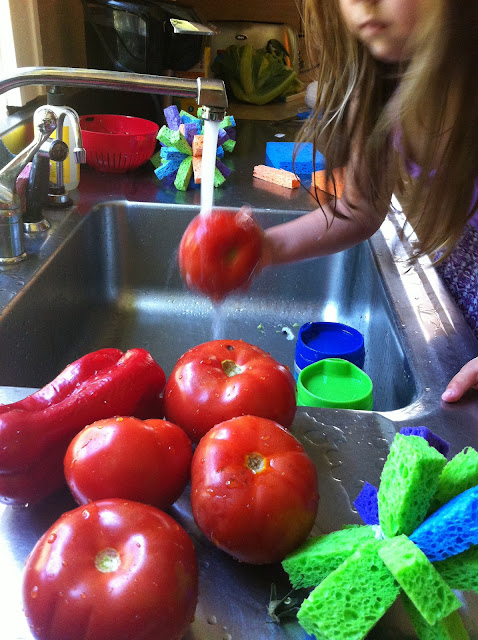 The end of June begins tomato season around here. While the ones growing in our garden aren't red yet, I have been seeing lots of beautiful ripe ones at the farmers market. On our recent trip to the Catonsville Farmers Market we bought a few and brought them home. They were so ripe and juicy I thought they might be perfect for Gazpacho. If you have never had it, Gazpacho is a cold, or room temperature tomato based soup, that I personally love. So I thought I would give it a test run as a family dinner and see how the girls liked it. 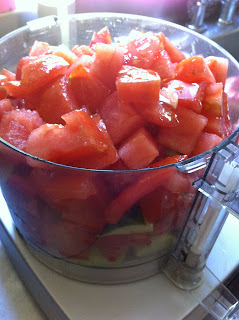 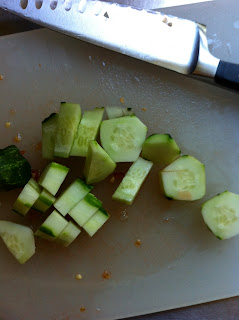 Making Gazpacho is very easy (which is perfect for a hot summer night when you don't want to cook) and there are lots of different recipes for how to make it and what to serve it with. We made ours by chopping up four large tomatoes, one large pepper, two small cucumbers and one small onion. We put all the veggies into a food processor and added the juice of half a lemon, 2 Tbs of olive oil, 1 Tbs of garlic and salt and pepper. I then blended everything up in the food processor until it was the consistency of a chunky soup, then added a little more seasoning to taste. The first time I made the gazpacho, I brought it on a picnic and neither of the girls were even the least bit interested in trying it. So two thumbs down that time with a verdict of: playing with cousins is much cooler then Gazpacho. A few weeks later I made another batch when we had some family over for lunch. The second time the Bee happily ate hers (and then had some more later for dinner) the Bean on the other hand pushed it aside totally uninterested. So the final rating kids: one thumb up, grown-ups: two thumbs up. Not bad for a dinner that takes five minutes to make and doesn't involve turning on the oven!
Posted by Katie at 1:21 PM