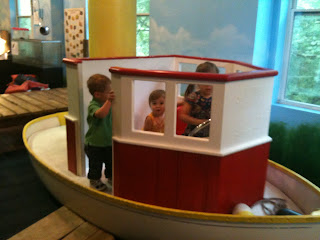 This morning we went to visit the Chesapeake Children's Museum in Annapolis. The museum is small but it feels like going to play at someones house and both Bee and Bean love going to play with someone else's toys! The museum was probably once actually a house so it only has a few rooms but they are packed with things to do. The first room had a boat and dock to climb on as well as fish, turtles a rabbit named Justin and a chinchilla. The second room had a kitchen, plastic foods and grocery carts that all the kids loved playing with. We spent the most time in this room although we have almost all of the above toys at our house, it never fails. Then there were two smaller rooms one a dress up room and another a doctors room with a dentist chair and lots of old laptops, phones and fax machines. The Bean and Cousin L had a blast pressing all the buttons. There was also a basement with a music area and an outdoor play area. This place also had a great community feel and for the $4 admission price it was well worth the trip!