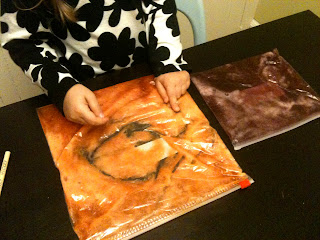 Recently we learned about mixing colors and The Bee is now an expert on the subject, in a way that only a three year old can be. So I thought she would enjoy this experiment I saw on The Artful Parent  called a Rainbow in a Bag. Except that I did something that I am often guilty of, I didn't read the directions. If I had fully read the directions I would have seen that the project used cornstarch, which of course we were out of. However, I had already mentioned the project to the Bee, so I had to improvise. I am happy to say our improvisation went very well. Inspired by our Bathtub Paints, I poured some clear hand soap into a plastic bag. Then guided by the Bee we added a few drops of food coloring in to the bag. We mixed one with yellow and red drops and one with red and blue drops, then sealed the bag closed. The Bee then smushed the bag all around mixing the colors up. She was delighted to see the new colors form! After the colors were all mixed up she spent some time drawing into the bag with her finger. This would probably be a fun way for an older child to practice writing their letters, but she enjoyed making shapes and lines. I do hope to try the Rainbow in a Bag project but in the meantime I am glad that to say that our improvisation led to a good discovery! 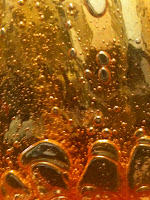 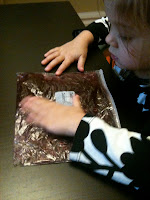