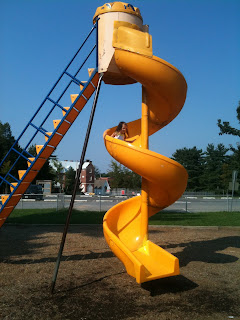 The Hannah Moore Park in Reisterstown (stop 3 on the playground tour) is a large complex with a school, walking trails, ball fields, a skate park and most importantly to us a large playground. Before we even got out of the car I knew this playground was going to be a hit because it had the largest twirly slide I have ever seen at a playground. The Bee spotted it while we were pulling up and was dying to go on before I had even ut the car in park. In addition to the slide (which is what the Bee spent most of her time on) they also have a sandbox, swings, climbers and even little rocking cars to drive. The thing I liked most about this playground was that it was nice and spread out, with lots to do for big and little kids. The playground area is flat and you can easily see from any place on the playground. One of the things the Bean liked the best was the giant sand funnel. It was pretty cool! Overall I am sure we will be back if nothing else then to visit the giant twirly slide again.

For a full list of Baltimore Playgrounds checkout our Playground tour 2011-2012
Posted by Katie at 1:46 PM